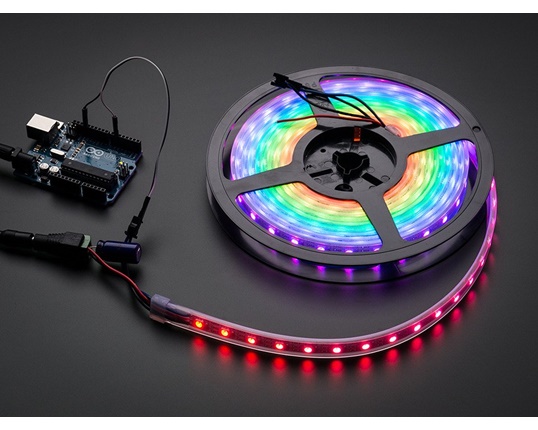 Art.nr: 1138
299 Kr 257 Kr
- +
Lägg i kundvagn tillagd i kundvagnen Till kassan
Finns inte tillräckligt många i lager, max antal:
Lagerstatus: 8
Leveranstid: 1-3 Vardagar
This is the strip with white flex PCB, its identical to the black 60 LED/meter except it has a different color mask on the flex strip

All your dreams answered, yet there are a few things to watch for. First up, the higher density...
Dela:

Produktbeskrivning
This is the strip with white flex PCB, its identical to the black 60 LED/meter except it has a different color mask on the flex strip

All your dreams answered, yet there are a few things to watch for.

Second, to get high density, the controller chip is inside the LED, which is kind of cool, but also means that the chip only uses a single pin for input and a single pin for output. The protocol used is very very timing-specific and can only be controlled by microcontrollers with highly repeatable 100nS timing precision. We have example code for using with the Arduino Uno/Mega microcontroller at 8MHz and 16MHz, and with a little effort you can use with the Raspberry Pi, or Beagle Bone Black, but it will not work with the Basic Stamp, NETduino, any other interpreted/virtual machine microprocessor or any processor slower than 8 MHz. For those processors, check our DotStar digital LED strip which has SPI-like input/output and works easily with Pi, NETduino, and other processors.

These LED strips are even more fun and glowy. There are 60 RGB LEDs per meter, and you can control each LED individually! Yes, that's right, this is the digitally-addressable type of LED strip. You can set the color of each LED's red, green and blue component with 8-bit PWM precision (so 24-bit color per pixel). The LEDs are controlled by shift-registers that are chained up down the strip so you can shorten or lengthen the strip. Only 1 digital output pin are required to send data down. The PWM is built into each LED-chip so once you set the color you can stop talking to the strip and it will continue to PWM all the LEDs for you

The strip is made of flexible PCB material, and comes with a weatherproof sheathing. You can cut this stuff pretty easily with wire cutters, there are cut-lines every 0.65"/1.7cm (1 LED each). Solder to the 0.1" copper pads and you're good to go. Of course, you can also connect strips together to make them longer, just watch how much current you need! We have a 5V/4A supply that should be able to drive 1 meter and a 5V/8A supply that can drive up to 4 meters. You must use a 5V DC power supply to power these strips, do not use higher than 6V or you can destroy the entire strip!

These come in 5 meter reels with a 2 or 3-pin JST SM connector on each end and separated power/ground wires. These strips are sold by the meter! If you buy 5 meters at a time, you'll get full reels with two connectors. If you buy less than 5m, you'll get a single strip, but it will be a cut piece from a reel which may or may not have a connector on it.

Adafruits detailed NeoPixel Uberguide has everything you need to use NeoPixels in any shape and size. Including ready-to-go library & example code for the Arduino UNO/Duemilanove/Diecimila, Flora/Micro/Leonardo, Trinket/Gemma, Arduino Due & Arduino Mega/ADK (all versions)