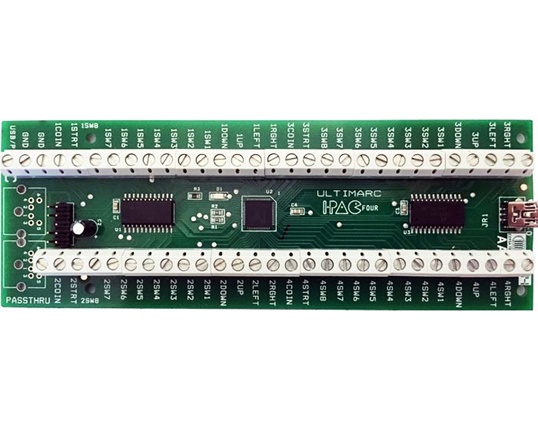 The I-PAC (Interface for Pc to Arcade Controls) are a range of boards which allow...

I-PAC - The world's most advanced PC interface for buttons and joysticks.

The I-PAC (Interface for Pc to Arcade Controls) are a range of boards which allow connection of arcade controls such as buttons and joysticks to a keyboard port or USB port on a PC motherboard. It was designed around the MAME emulator which supports over 1000 arcade games and can be used with other emulators or any software which requires keyboard or game controller input.
It is designed to be used inside an Arcade Games cabinet with the PC motherboard also mounted inside, but could just as easily be used with simply a control panel without a cabinet.
Special shift function buttons mean that a normal keyboard is only be needed for game loading and configuration, not for gameplay. All key codes can be programmed but you dont have to as you can use the built-in default configuration which has all standard MAME codes for quick and easy installation. Programmed keys codes are stored even after power off. The I-PAC4 has 56 inputs. All programmable and marked as 4 joysticks, 8 buttons each plus coin 1,2,3,4 and start 1,2,3,4. Any inputs can be assigned as a shift key to access separate codes sets. This board also has a connector which can be configured to plug our trackball and spinner into, or for our console interfaces.
The MAME control keys are by default assigned to the "A" and "B" inputs. Check out the code table here for all default assignments.